Like the title says. We’ve put it up on Philomela, a lovely free Twine hosting site. Play it here and tell ya friends!

(Edit: Not sure how to have Philomela access our sound and art assets, so USE THIS LINK instead: http://bit.ly/1lvq1oN)

Here’s the Philomela link, but you should use the previous one: http://philome.la/raabgames/agency

Okay! It’s been well over a month, meaning I have been terribly negligent in my blog duties. So let’s get right into it!

Most of the summer was occupied by the amazing Critical Hit program at Concordia University’s TAG Lab. Each of the 15 other participants were phenomenally talented and wonderful people, and I’m honored to have spent 10 weeks making games alongside them.

I ended up working primarily on Agency, a text-based game built in Twine that explores themes of morality, necessity, and bureaucratic obfuscation in a not-so-distant-future America. You play as a government Inspector tasked with extracting information from a suspect. It will be online very soon, and I’ll post a little addendum when it is. I created the game alongside fellow NYU MFA student Pierre Depaz, and under the indispensable tutelage of Leanne Taylor and Jonathan Lessard. 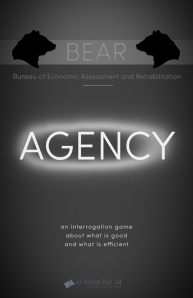 On other fronts, Crystal Brawl was accepted into the Boston Festival of Indie Games (September 13 at MIT). Geneses, sadly, was not, but we have some good hypotheses as to why – more to do with difficulties in UI and teaching the rules than with the quality of the design, in which we’re completely confident. Still waiting to hear back from IndieCade about those two and Nika, but that should be coming soon.

Additionally, Crystal Brawl will be showing at two festivals in the near future: lwlvl this weekend in Williamsburg, and Maker Faire NYC September 20-21 in Queens. We’re going as part of Mark Kleback’s wandering indie arcade carnival Deathmatch by Audio, and both events look like they’re going to be awesome. Hope to see you there!

Lastly, team assembly and preliminary design work have begun on my MFA thesis project. I won’t say much for now, but stay tuned. It’s gonna be good.