Nika Is Coming (Along)

Hello! It’s been quite a while, hasn’t it? Have a seat.

To start: Nika is getting close to entering production! Artist Chris has been hard at work laying out the instructions and revising the board art, while I’ve been moving the rules toward a final edit. I also sent several prototypes off to Ralph Anderson, VP of marketing and PR at Eagle Games, who’s been analyzing the game and running playtests.

As part of this process, I attended Metatopia yesterday and today. I ran the first blind rules tests of the new layout instructions and got a ton of great feedback. The game inspired its usual focused intensity, as seen here: 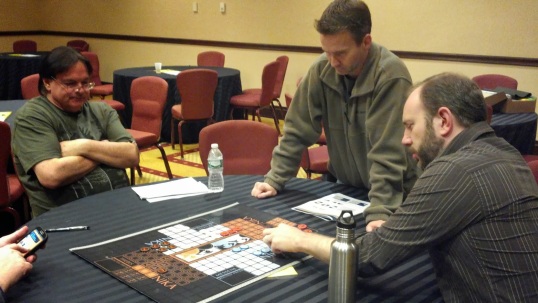 The Nika app is coming along too – we’ve polished the controls and added a new tutorial, We’re also looking into online play and AI. We’ve successfully deployed the game on a number of different platforms, so it may have a fairly wide-ranging release, though I don’t want to make any explicit promises.

We’ve managed to find some time to work on Crystal Brawl, which gets better and better after every session of work. UI, feedback, and game balance are all improving, and everyone who plays it agrees the game’s just fun as hell. No release date is in sight, as we still may need to port it to Unity in order to support more platforms, but we’ll get it out there someday. 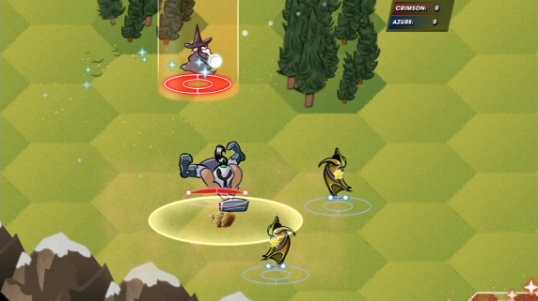 Finally, for those of you wondering what I’ve been doing at school, I’ll just demonstrate by listing the games I’ve created this semester with a short description… (games with *asterisks are video games)

1. Warslayers 2: The Battle of Warslayer Hill – a mod of the card game War – with Char George and Elyse Lemoine

2. Shifty Critters – a tile-shifting game where 4 farm animals use their special powers to make their way toward victory squares – with Char George, Sig Gunnarsson, and Chang Liu

*3. In the Dungeons of Gnomes – an action video game where little square gnomes compete to destroy each other’s bases while upgrading their powers with hidden gems

4. The Emperor’s True Love – a hidden role game where the ladies of the Emperor’s court vie to win his favor without accidentally poisoning him to death – with Sig Gunnarsson, Brad Lee, and Will Pang

*5. Mace Magus Malebolge – a first-person hack-and-slash video game where you use your magical mace to ward off never-ending waves of demons – with Vanessa Briceño

6. The Great Porridge Purge – a hex-based cooperative game where players eat their way through a village flooded with porridge, battling time and the urge to vomit – with Elyse Lemoine and Geoff Suthers

Not bad for two months’ work! Next semester will be even more intensive, as I’m taking Bennett Foddy’s Rapid Prototyping course, where you make a video game every goddamn week! This is in addition to two other production courses. I’ll either go insane or, um… make a lot of games. Let’s hope it’s the latter!