As of last Monday, I am now a designer/producer at Grasshopper NYC! It’s a full-time position for the summer, and I may be able to stay on part-time once I start at NYU in the fall.

Grasshopper has been called “the most exciting thing in New York’s gaming industry right now” (approximate quote). The general idea is to make sophisticated gaming lounge spaces focused around a circular digital touch-table they have developed. If all goes well, we’ll open our first location this fall.

My job is to produce games for the table and run playtests. It’s a great project to be part of, and I had a blast my first week there. It’s gonna be a great summer… 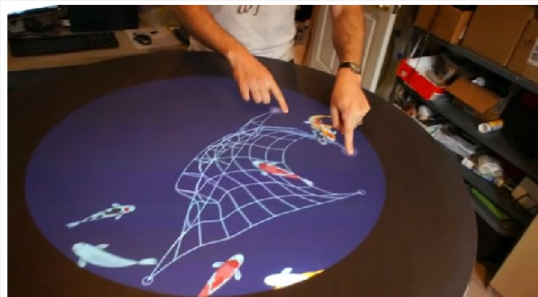 …and YOU can be a part of it! I’ll be running playtests on the table all summer, ideally for groups of 3-4 people. We’re happy to have anyone, but we actually prefer non-gamers, so bring your non-gamer friends!

Our office is in west Soho. Weekday evenings are best, but we may be able to set up other times if that’s better for you. E-mail me (joshr2121@gmail.com) if you’re interested.

Really, we just want you to come in, play some cool games, and tell us how to improve your experience the next time. We will also give you beer. Free beer. Not making that up.

Also! Grasshopper will be at Come Out & Play After Dark, a free and public NYC games festival, on July 12th from 7 PM onward. Even if you don’t come into our office for a playtest, you should really go check that out, it’s awesome.

Otherwise, some game jam buddies and I are starting up Studio Mercato, a loose affiliation of… well, my game jam buddies and myself. It’s basically just a way to team up and showcase the games we’ve made both together and independently. We’ll have a website and stuff soon, it’ll be real professional. More news to come, I imagine.