The Battle of Tanagra: Organic Warfare in the Hegemony Series

Attica was a fortress. Though my Peloponnesians had conquered countless islands from the hated Athenians, including Aegina and Salamis right on their doorstep, their home peninsula remained forbidding as ever. To the north lay Euboea, a seabound shield against the Sporades. Megara on her isthmus, Tanagra in her open field, and Eleusis by her mountain held the western approaches. And any invasion via Sounion would break against the walls of Athens herself, as the Cape held no smaller towns to serve as forward bases.

But hope was not lost. I had marshalled my forces from all directions. The troops of Attica and Euboea were legion, but they could not protect every front at once. From my staging point at Aegina, I would land hoplites near Megara. I would transport men from the freshly taken Scyros down to Euboean Oichalia. Most dramatically, I would launch an all-out assault on Tanagra, the centerpiece of the Athenian defensive line. As my hoplites were only just numerous enough to surround the city, they would need to fend off enemy reinforcements while simultaneously maintaining the siege. I would provide them with plentiful cavalry and peltast support, but auxiliary units like these would collapse quickly without a battleline of heavy infantry to act as a holding force against enemy hoplites. Two more of my own hoplite units were holed up in Decelea, behind Tanagra, but their supply lines had long been blocked. They were starving, and would rout at once if engaged.

This is a scene from Hegemony Gold: Wars of Ancient Greece, but with a little rewriting it could be a passage from Thucydides. That’s not in itself remarkable; most strategy games can support a realistic narrative. Hegemony may be more detailed than some, but detail is a known variable, commanding the familiar spectrum which runs from simplified/abstracted to complicated/realistic. More intriguing to me is a certain nebulous quality, a term I will have to coin and explain here. Hegemony does a better job than any other game I know at creating organic warfare. 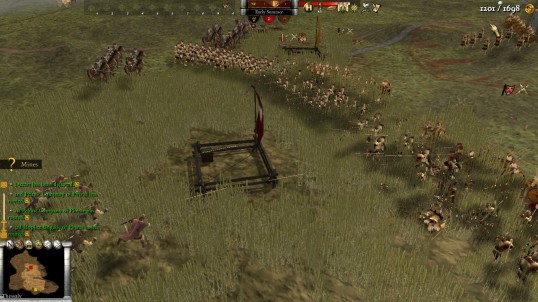 So, what am I talking about? It’s fuzzy territory, but I’d like to propose at least a working definition. Let’s say organic gameplay comprises situations, events, and results that appear to happen naturally, in accordance with what we expect from our knowledge of the real world. In that case, a game with organic warfare should complement our conception of commanding a military force. It should suspend our disbelief, creating seamless flow by immersing us in the experience. Things should “feel” right, as though they are happening as part of a logical, consistent, and more or less realistic system. And that system must appear unstructured and elegant, even though it of course arises from design decisions and lines of code. 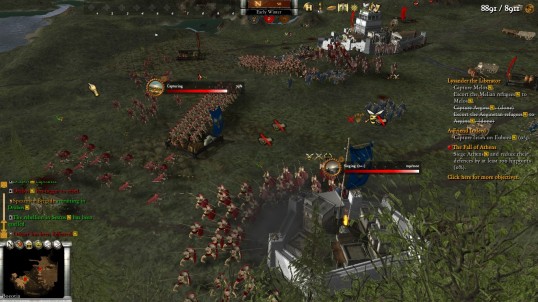 Not satisfied with that explanation? Me neither. It may help if I explain by negation, telling you what is not organic. First, and most important, hyper-realism is not organic. There are two flavors of hyper-realism in games of war: experiential and statistical. History buffs like to imagine a game that would play exactly like being a soldier or general. You would have to worry about signaling orders in battle, gathering and checking intelligence, purchasing and maintaining equipment, posting sentries, drilling your soldiers, and so on. That game would suck. More, it would almost certainly fail to feel organic. The more closely it approached reality, the more painfully obvious the limitations of the game system would be. With sufficient technology, it might in time become indistinguishable from commanding an actual army, but I suspect that’s not as much fun as playing a strategy game.

Statistical hyper-realism, on the other hand, has too hard a focus on mathematics. Though ideally the calculus reflects tactical principles, winning is often more a question of arithmetic than of generalship. All strategy games rely on numbers at their core, true, but an organic system will minimize the player’s involvement with them, highlighting the experiential aspect instead. A helpful analogy may be the difference between a baseball card game like Strat-O-Matic or MLB Showdown and a baseball video game: which feels more like playing baseball?

Along similar lines, turn-based video games like Civilization, Advance Wars, or Fire Emblem can hardly feel organic. All rely heavily and blatantly on numbers. They are highly abstracted and stylized, making it much more difficult to forget that you are playing a game. The Total War series occupies a sort of middle ground here, zooming back and forth between real-time tactical battles and turn-based empire management. This shift, already unnatural enough by itself, also mandates certain structural concessions. Strategic movement happens by turns and in groups, reinforcements and retreats are handled awkwardly, and so on. While the Total War formula has many advantages over Hegemony’s, for example facilitating the management of massive empires and allowing the player to devote his complete attention to each battle, it nevertheless remains the less organic of the two.

What about real-time strategy games like StarCraft or Age of Empires? In these, the player is required to split his attention between resource management and troop maneuver, distracting from either by demanding both. The breakneck pace of competitive matches compounds the problem, making physical speed and hotkey mastery at least as important as tactical prowess. Furthermore, at least for factions that rush, units pop out, move, and die so quickly that they possess little individual value. These systems are deep, strategic, and fascinating, but the experience they create is a beast all its own, little resembling that of a conventional general.

The Europa Universalis titles are grand-scale RTS games like Hegemony, and so perhaps a good candidate for comparison. However, they simply lack any tactical element, preferring to focus on exploration, economics, politics, research, religion, and so on. War is conducted at a macro level, with the player handling little more than recruitment and strategic movement, reduced to a spectator in battle.

Hegemony games, on the other hand, are all about warfare. The first installment, Philip of Macedon, had no diplomacy system whatsoever, and the one in Wars of Ancient Greece is skeletal at best. The only resources are food and money, the latter of which is divided solely into income and expenses, instead of being gathered and spent as in a typical RTS. Foreign trade does not exist, and while internal supply lines do generate a minimal income, their main function is to move supplies around to feed soldiers. But these are not mere omissions. Rather, I would argue that Hegemony achieves organic warfare in large part by making that aspect its primary focus. 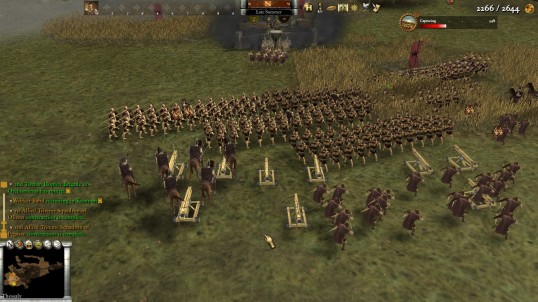 But there are other factors as well. The game benefits from being real-time, as its necessary abstractions are less apparent. For example, a hoplite brigade in Hegemony consists of 40 to 50 men, representing roughly the military capacity of a small ancient Greek town. A more realistic figure might be around 200, but in a turn-based game, the unit would probably be displayed as a single piece. Likewise, measuring in game time, troops take seasons, years, or decades to cross even short distances in Total War and Civilization titles, while movement in Hegemony occurs at an impressively realistic clip.

The game’s single-player nature also helps, allowing the player to stop, think, and plan like a real strategist. The level of coordination this permits might be unrealistic, both in local combat and between far-flung forces, but it’s also true that one general would not personally command every brigade in a battle, or be expected to manage armies hundreds of miles apart (unless his name is Subutai). Ready access to the pause button allows one player to act as many captains without worrying about his APM. 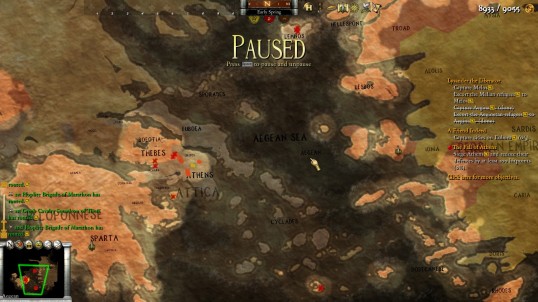 A single-player game could not be organic with poor AI: few things shatter immersion faster than finding an exploit. But Hegemony delivers smart, skillful enemies. Their workings are also reasonably transparent; though their funds are invisible, their troop creation and movement can be tracked with a bit of reconnaissance, from which it is clear that the computer operates within the same system as the player. Strategy game AIs are notorious for bending the rules to increase difficulty, as in the case of the dreaded “tiny nation with a giant army.” (Looking at you, Total War and Europa.) The challenge may be fun, but the idea is ridiculous. Now, the Hegemony AI isn’t perfect, especially on the sea. But it’s humbling, fascinating, and infuriating in the best way to be repulsed by an expertly staged defense, or punished with incessant raiding for leaving a border poorly guarded. The AI’s ability to mount a decent naval invasion, a feat that eludes many of its ilk, deserves a special mention. 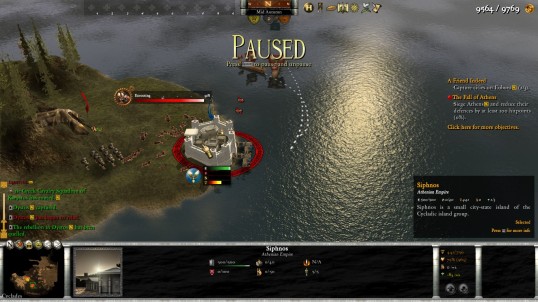 The conflict between player and AI which provides the core gameplay relies on several closely connected systems, foremost among them logistics, troop movement, combat, and siege. Each of these contributes to the organic feel of play. Logistics are simple, allowing the player to concentrate on maintaining blockades, ravaging the countryside, and protecting his own supply lines. Since units need food in the field and big armies tend to move slowly, major invasions require careful planning lest the men starve before they capture their target. When moving far afield, larger forces may need workers, slaves, or ships to bear additional supplies, though enemy farms or captured sheep can provide rations in a pinch. 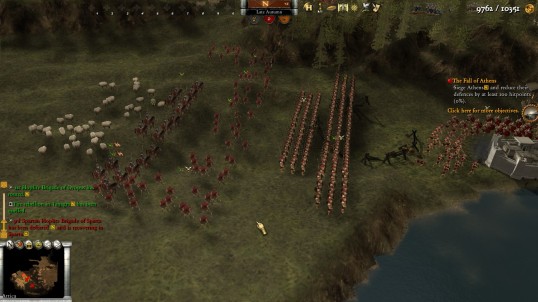 Conversely, small raiding parties of cavalry or light infantry can scout ahead, harass enemy supply lines, and capture unguarded locations, then use their speed to flee if necessary. Triremes can whisk battalions across great distances unopposed; in Philip of Macedon, the Athenian navy is the bane of the early game, popping up out of nowhere to harass your heartland before disappearing with impunity. 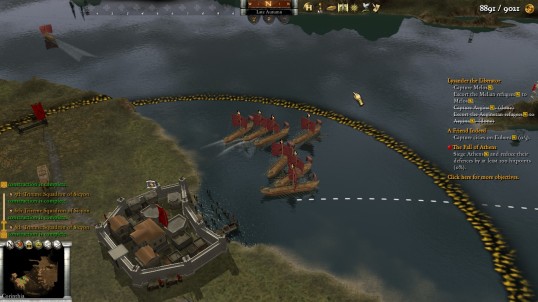 For a game about war, Hegemony’s combat is surprisingly straightforward. There are only a few land unit types: the campaigns in Wars of Ancient Greece star hoplites, peltasts, and light cavalry almost exclusively. Others have prominent roles in the Sandbox mode (notably catapults) and Philip of Macedon (notably phalangites) but recruiting options are always limited, so it’s easy to know which unit to pick for a given job. Battles follow basic rules: heavy infantry thrash light infantry and cavalry, while a cavalry charge can rout light infantry. Being flanked or pelted with missiles reduces morale, as does running out of food or losing soldiers. I won’t describe the whole system, but it’s pretty easy to wrap your head around, especially if you have some grounding in the history of the period.

Sieges are even simpler. Besiegers reduce the hit points of cities or forts at a certain rate. Soldiers within slow this rate and rain missiles from the walls. If the target is starving or undermanned, it falls faster. Bigger towns have more hit points. That’s about it.

These systems and others combine to create a realistic, engaging, and organic experience. In the second half of this article I’ll explore what exactly that entails. How does a game with organic warfare play out? What does the player do? How does the AI respond? And what makes the whole thing “organic?”

[Special thanks to Ryan Belanger for setting me straight on StarCraft, or at least trying. If I still messed that part up, the fault is mine.]