The Moods of the Moon: Writing Style in Superbrothers: Sword and Sworcery EP

“She told us about how the dreams of her people held many mysteries & how they reflected the moods of the moon in strange ways.” 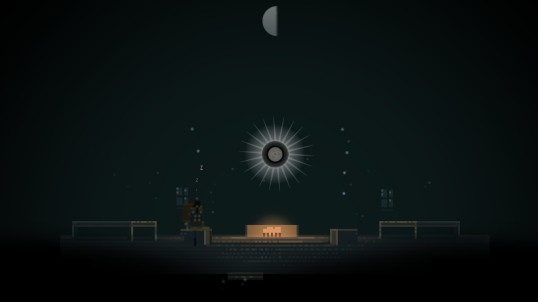 A shadow looms over our culture. It is the shadow of fear: fear of sincerity, fear of beauty. The creation and display of earnest art invites vulnerability, exposing the creator to parody and derision. There are ways around this: keeping one’s work private, sharing it only with carefully curated communities, professing disdain for the taste of critics. I have employed all of these.

But the best defense, perhaps, is self-effacement. If you strike the first blow against yourself, you cut off that avenue for others. More, you demonstrate awareness: “Of course this is absurd; we have outgrown the beautiful.” It is a knowing wink to the wolfpack: “I am one of yours.”

Yet sincerity has not perished. The drive to create works of wonder lingers, struggling against the fear of shame and alienation. A crystalline case of this conflict can be seen in the writing of Superbrothers: Sword and Sworcery EP. It is not hard to find; quite often, these opposing strains cohabit a single sentence:

“The Bright Moon looms & we just woke a sylvan sprite from the still waters of a lake where a mother duck was freaking out.”

“We had heard about the gateway to the infinite at the summit of Mingi Taw & we thought it sounded like something cool to see.”

From text like this, it is possible to surmise that the writers are repressed poets, hiding behind a hipster slang shield. (This is a good place to admit that, despite some research, I cannot figure out who the writers were, or if there was more than one.) In this reading, they wanted to craft a shimmering song of sworcery and mystical musical mysteries, but knowing that so doing would expose them to shame, they chose to compromise rather than retreat completely.

But I think this is wrong. I believe S&S is written just how its creators desired, employing a deliberate dualism of irony and beauty. Perhaps this style could only exist in the current cultural atmosphere, but its wielders inhabit it so completely, explore it so fully, and use it so effectively that one cannot help but feel it is their natural state.

To back up that statement, I must examine the precise mechanics of S&S’s writing style, moving beyond, or rather into, its general duality. What persuaded me that the text is a work of love and not a work of fear? And can I use it to persuade you as well?

To me, the most salient aspect of the style was the iron bond between certain nouns and the adjectives or phrases that describe them. In most fiction writing, such description serves first as an introduction and later as a reminder, but does not impose itself every time a thing is mentioned. If we meet a “tall man,” we will be annoyed if we read that phrase, “the tall man,” whenever he acts or appears. It would feel pointless and condescending: we get it, thank you. Plus it’s not that important anyway—verbs are what drive action, not adjectives or descriptive phrases. In a graphical video game, where we have sight and sound, such language should be entirely superfluous.

But that is exactly what we find in S&S. The effect goes far beyond what we encounter in ordinary writing, and eclipses even the Homeric epithet, a tempting analogy. We recall “Hector,” not “Hector, tamer of horses,” but in S&S these descriptors are inseparable components of identity. We don’t pass through just any old cave to reach the Trigon Grove, but rather a “cavernous cave.” We use a “burdensome book” to complete our “woeful errand,” which takes us from a “deepwater pond” up along “the old road to Mingi Taw” to a “perilous precipice.” We encounter the “deathless spectre” and “worthless sheep.”

And we remember them due to a second stylistic mechanic: constant repetition. If we only read each of these phrases once or twice, we might notice the general effect, but specific examples wouldn’t stick. Now, some of them are one-off, being attached to puzzles or unique events, but many appear over and over. The noun phrases mentioned above are not the only case either: we “monitor the moods of the moon” to determine when it will be (maybe just maybe) “a time of miracles,” and so on.

In case another mnemonic was needed, the writing features frequent alliteration. Some examples have already been noted: the “cavernous cave,” the “burdensome book,” and so on. But there are entire sentences as well:

“Sadly the Scythian’s corporeal self & psyche have been significantly sapped by sworcery—she is at death’s door.”

I initially suspected they might overplay the “S” thing and the whole game would end up like the protagonist’s opening monologue in V for Vendetta, but they use it with discretion. Likewise, not every descriptive pairing involves alliteration: “woeful errand,” “worthless sheep,” “placid lake.” 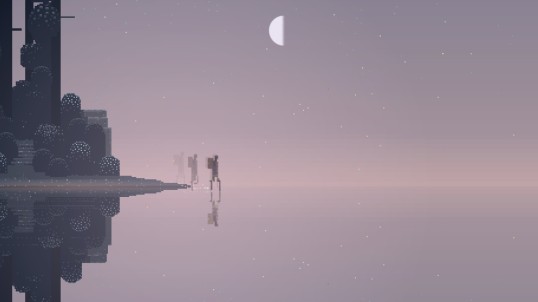 While not all alliterative, every repeated phrase, and the vast majority of the writing in general, was crafted with close attention to meter. Not that the script is in iambic pentameter, but it’s closer to Tennyson than Ginsburg, dealing broadly in dactyls (“perilous precipice”) and trochees (“deathless spectre”). Of course, the ironic sections drop this completely, along with most (but not all!) of the other mechanics I’m discussing (move it move it).

“Miraculously the sinister storm has lifted & glorious sunlight has returned to the realm so that’s totally awesome.”

Finally, we have the use of florid but meaningful diction. When writing a mysterious savant character like the Archetype, it’s easy to have them speak in pseudoscientific gibberish. However, when he speaks of the “mythopoetic cosmology” of S&S, or indicates that you will need a knowledge of “psionics, cryptozoology, and miracles,” his words carry actual meaning. S&S has a distinctly mythical feel, built in part by its treatment of space, time, and order. Sworcery is a form of mental magic; the Grizzled Boor is essentially a dancing yeti of the Caucasus; and miracles abound.

I have been focusing on the mechanics of the poetic writing in S&S, not the ironic. At this point, it may seem hard to defend my claim that the irony is a natural part of the style. Aside from the perfect integration of irony with beauty, what evidence do I have? Well… you might ask Dogfella. Or, Logfella. Or, better yet, Girl:

“Did you ever notice that sometimes words just sound like noise but other times noise makes the prettiest sound?”